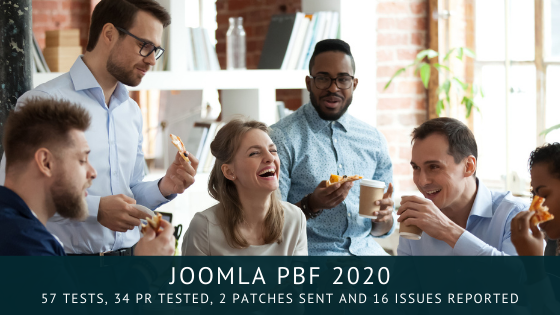 When we embarked on our Techjoomla journey 11 years ago, one thing we were acutely aware of, was our commitment to contribute to the open source Joomla community. Having a sense of community unites us. It brings out the greater good besides serving as an opportunity to connect us with people who have the same goals as ours. This fosters communities of practice and it is these communities that connect us with opportunities, as well as knowledge distribution and growth.

Just last year, we hosted one of the largest global, synchronous events from our office in Pune, India and sponsored an event called “Joomla Pizza Bugs and Fun”, our way of making life at work fun and also for helping the community with our expertise and services.

This year, the Joomla PBF events were held on 7th November 2020 and 5th December 2020 respectively. We announced cash prizes for winners and participants thus incentivising them to contribute for the global good of open source technologies like Joomla.

We also helped introduce new developers to the Joomla community. We realized these developers and contributors were as excited as anyone of us to report new bugs and issues. A lot of them delivered patches which further helped to deliver solutions.

This event saw testing of 13 pull requests(PRs), 25 tests were done, 2 patches were sent and both the patches were merged in the Joomla-4 branch. 15 valid issues were reported for Joomla 4 excluding duplicates and invalid issues.

This edition of the event saw testing of 21 pull requests(PRs), 32 tests were done and 1 valid issue was reported for Joomla 4 excluding duplicates and invalid issues.

Overall, the event was a massive success and our team worked on many Joomla 4.0 release blockers which will help expedite the much awaited Joomla 4.0 release. It was an amazing experience and we look forward to hosting the next edition of the event.

We would love to hear your thoughts and how your events went in your region.